The former city powerplant, De Elektriciteitsfabriek, once was a place in which mankind controlled nature. Stone was stacked, steel casted and machines were installed, all in order to generate energy. Now, years later, time is showing its influence. The space is stripped of its function giving rise to a new kind of nature. It is in this space where the Garden of Absent Matter is manifested.

By redefining an area whithin De Elektriciteitsfabriek as a garden, a new framework has been created, allowing for new relations and connotations. Dried curled paint flakes drop from the steel construction beam like leaves from trees in fall. The industrial production in past decades accumulated dust, rust and sand, a new soil. Plateaus, which once served for carrying machines have become rocks. The work is a direct reaction to the space that is given. With cultivating the space, three main areas are named: the tree, the pond and the rock. Three elements that are essential in Japanese gardening, whose compositional laws are applied during the creating process, such as shukukei (miniature landscape), mitate (metaphoric representation) and shakkei (borrowed landscape). Directed through presence and absence, transition, movement, positioning, light and color a new concentrated timespace has grown, emphasizing the nature and energies that are around us, always and everywhere. 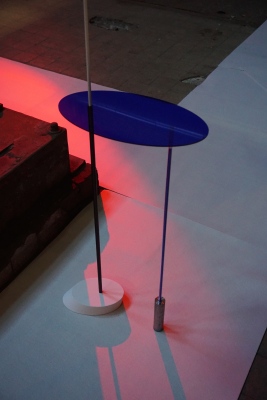